Sheriff Clarke challenges Obama to protect himself, give up Secret Service Protections...but forgets to ask Walker to do the same thing.

Awhile back Milwaukee County Sheriff David Clarke decided to lighten up on the security detail for President Obama's visit to Milwaukee, because he was having a tantrum over budget cuts he disagreed with.


Fox 6: Sheriff Clarke said the protection of the President of the United States is the responsibility of the Secret Service, and local law enforcement provides a supporting role. Sheriff Clarke ... saying budget limitation forced the department to scale back its involvement. Clarke said the sheriff’s office used to set aside money to protect presidents in years past, but the County Board and Milwaukee County Executive Chris Abele eliminated that funding.

Fast forward to yesterday, when Clarke went further, suggesting Obama give up his security guards altogether to see how he likes risking his life daily, like every Joe average citizen supposedly does. 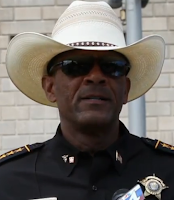 The sheriff accuses Democrats of "exploiting misery and tragedy" to pursue a political, anti-gun agenda.


"But here's my challenge to the president of the United States, you think this is so easy. Forego your Secret Service protection, for you, for the first lady, and your children, and see what it is like to have to fend yourself. And then we'll sit down and have a conversation so you know what we here at ground level have to deal with on a daily base in terms of self-defense."

Big talk from a guy in a uniform carrying a gun.

But he should offer the same challenge to Scott Walker. Let's see if Walker will feel safe and secure carrying his own firearm, ready to protect himself and his family.

For Clarke, the carnage is an acceptable price we all have to pay for his misreading the 2nd Amendment. Shit happens, die for it. Credit Clarke for being honest and admitting there's nothing he do to improve public safety, except give more people guns:


Clarke said the Constitution does not prevent terrible things, such as this week's horrific murders near Roanoke, from happening. "Well, look, Sean, as you know, terrible things happen in this world from time to time. We have to be a little more humble about our ability to prevent every horrific situation from happening.

So if we're trying to make this absolute, that none of these things will ever happen again, we're working on the wrong thing, because unfortunately the world we live in, with the evil that exists, it's going to happen."