MSNBC's Lawrence O'Donnell summed it well when he described the Republican response to the out-of-control gun death toll in the U.S.. 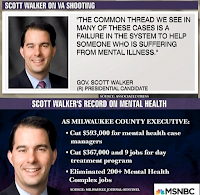 "It's not like the Republicans have found something they actually want to do about this, it sounds like they want to use the phrase "mental health" to suggest there's no government responsibility."

Scott Walker stands out as the most hypocritical of them all on mental health solutions. See the contrasting actions picture to the right. And it's not just Walker, it's every Republican trying to shred our social safety nets that include money for treating mental health.

In taking a political cheap shot at Hillary Clinton, Walker was also taking an insensitive slap at the father of the reporter killed in Virginia. After all, what does he know:


"It's unfortunate that all too often we've seen from people like Hillary Clinton a political reaction to something that's much more sophisticated and challenging than that. The common thread we see in many of these cases is a failure in the system to help someone who is suffering from mental illness."

Big talk and empty excuses. Like everything else, Walker believes a little positive spin and rhetoric will result in positive, happy, rainbow filled outcomes for all.

Just as ridiculous are those politicians who want to change human nature first. Yes, that's really their solution. I thought they didn't believe in evolution?

The video below doesn't just show Walker's forgettable "mental health" solution that will fade after a few days, but similar statements by the other GOP presidential candidates who just want to get this behind them.


Clinton said that if guns weren't so readily available, perhaps carnage like the killings of WDBJ-TV reporter Alison Parker and cameraman Adam Ward by a disgruntled former employee could be prevented.

Naw, let's talk about mental health for a few days. Next up, a talking point solution for those shooters who don't have mental issues. That might take some time...
Posted by John Peterson, Democurmudgeon at 8/28/2015 01:13:00 PM