Walker's plan will no doubt be a regurgitation of every free market, "patient centered" GOP idea we've rejected for years. The problem: the failed individual market (the ACA replaced it) was based on free market principles that resulted in dropped junk policies, weeded out those with preexisting conditions, and saw double digit premium increases that screamed collusion within the industry. Yea, lets try that again.

Citizen Action of Wisconsin notified the public of this bit of "ObamaCare" irony: 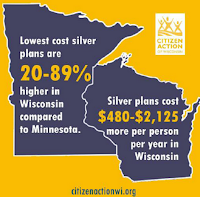 On Tuesday August 18th, Scott Walker's Presidential Campaign is going to release his plan to "repeal and replace" the Affordable Care Act. It is not often you get advanced notice of a major gaffe, but this is one of those times.

The reason is that, of all the places the Walker Campaign could choose to release their healthcare plan, they pick the one state that shows how to properly rein in insurance companies - Wisconsin's western neighbor Minnesota. Minnesota has the most affordable health coverage in the country, while Wisconsin has the most expensive Silver plans in the Midwest.
In fact, the cost disparity is so bad that the small business in the Minneapolis suburb of Brooklyn Center where Walker is announcing his plan would likely be paying from $500 to over $1,000 more per employee if they were based in Milwaukee County, where Walker used to be County Executive. Minnesota uses rate review to police insurance company rate increases to root out excessive costs.