Jobs Race to Bottom: The Unheroic Republicans: If you’re sinking in quicksand, take as many people with you. And Walker to Fire 12,000 workers?

The only thing left for Republicans in the state legislature is to fire 10,000 to 12,000 public employees.
Will that really help get them get elected in two years? What a way to appease the minuet number of tea party low information voters.
Republicans on a state and federal level are on a political suicide mission to do everything they can to balance budgets all the while destroying public, and soon private, wages and benefits. Wisconsin is open for bottom feeding, low wage businesses. Yeah?? 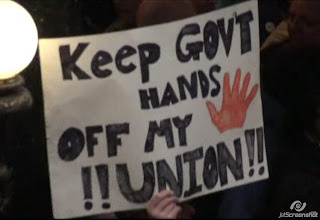 Despite the unions agreement to accept Walker’s demanded wage contribution to benefits; the governor is refusing to address the removal of collective bargaining. He’s counting on the public’s lack of familiarity with collective bargaining to sell his message of austerity.
First the fear factor:

Fox News: Walker said while the state enjoys a lower-than-average unemployment rate -- about 7.5 percent compared to 9 percent nationally -- about 5,000-6,000 state workers and 5,000-6,000 local government workers could lose their jobs if they don't accept changes to their benefits plan (but they have!!!!) … If changes aren't made to the benefit contributions paid by Wisconsin's nearly 300,000 public sector employees, about 10,000-12,000 workers will lose their jobs, Wisconsin Gov. Scott Walker warned Sunday.

Again, the benefit concession has already been made. Walker is now talking about using the power of  government to intrude into the rights of labor to organize, or basically, bust the unions and keep ‘em out by:

not “forcing” employees to pay dues and would have to hold annual votes to stay organized. Protesters and Democratic lawmakers have likened Walker to a dictator.