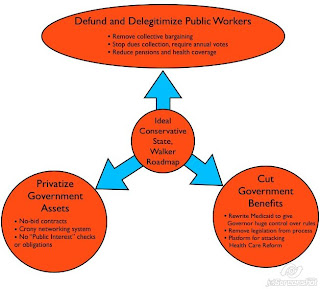 Rortybomb had this great summation of our situation in Wisconsin. Love the graphic:

Tim Fernholz wrote an excellent article in the National Journal about the “bait and switch” of Governor Walker’s Wisconsin plan. Fernholz points out that the short-term deficit problem can be covered by debt restructuring, and that the big pieces of the bill that relate to dismantling public sector unions, control over Medicaid and creating a no-bid energy asset sale process are not directly budget related.

There’s a three-prong approach in Governor Walker’s plan that highlights a blueprint for conservative governorship after the 2010 election. The first is breaking public sector unions and public sector workers generally. The second is streamlining benefits away from legislative authority, especially for health care and in fighting the Health Care Reform Act. The third is the selling of public assets to private interests under firesale and crony capitalist situations.

What I found most interesting about the 20 minutes phone call between Governor Walker and a prankster claiming to be David Koch (transcript) is this:

WALKER: Yep. This is our moment…I had all my cabinet over to the residence for dinner. Talked about what we were going to do, how we were going to do it, we had already kind of doped plans up, but it was kind of a last hurrah, before we dropped the bomb and I stood up and I pulled out a, a picture of Ronald Reagan and I said you know this may seem a little melodramatic but …when he fired the air traffic controllers and uh I said to me that moment was more important than just for labor relations and or even the federal budget, that was the first crack in the Berlin Wall and the fall of Communism because from that point forward the soviets and the communists knew that Ronald Regan wasn’t a pushover…

Firing the air traffic controllers brought down the Soviet Union? When the true believers get together and talk openly, they don’t talk about this being about the budget, or getting innovative school practices in place, or whatever. It’s about showing their enemies that they mean business and aren’t pushovers. He believes that by smashing one you can smash them all. And he believes he is the first domino to move.

Other states won’t need unions to fight. Notice Providence, Rhode Island firing all of their teachers, to selectively rehire them later. This is how ground out our elites want to see the labor contract.

Here are a few elements of "creative destruction" included in the Walker budget plan. See more at Think Progress:


1. ELIMINATING MEDICAID: The Budget Repair Bill includes a little-known provision that would put complete control of the state’s Medicaid program, known as BadgerCare, in the hands of the state’s ultra-conservative Health and Human Services Secretary Dennis Smith. Smith would have the authority to “to override state Medicaid laws as [he] sees fit and institute sweeping changes” including reducing benefits and limiting eligibility. Ironically, during the 1990s it was Republicans, especially former Gov. and Bush HHS Secretary Tommy Thompson, who helped develop BadgerCare into one of the country’s most innovative and generous Medicaid programs. A decade later, a new generation of radical Republicans is hoping to destroy one of Wisconsin’s “success stories.”

2. POWER PLANT PRIVATIZATION AND ENVIRONMENTAL NEGLECT: The same budget bill calls for a rapid no-bid “firesale” of all state-owned power plants. One progressive blogger called the proposal “a highlight reel of all of the tomahawk dunks of neo-Gilded Age corporatism: privatization, no-bid contracts, deregulation, and naked cronyism” and suggested that the provision will open the way for large, politically connected corporations, like Koch Industries, to buy up the state’s power plants on the cheap.