MSNBC's Cenk Uygur talks to Ed Schultz in Madison, in front of the capital. Ed defends labor as only he can, with force. Great stuff:

Here's the latest video of todays (Thursday) protest against labor in Wisconsin. I took the kids and they not only loved it, they saw how it looks to take action, defend themselves against dictatorial politicians (they couldn't help but mention Star Wars' Emperor Palpatine a few times) and then rewarded themselves with some State Street popcorn. There was one guy carrying a sign accusing the teachers of being AWOL, but his short temper made peaceful demonstrators uncomfortable, especially after being reminded constantly that he had a right to be there too. Yeah, we know.

Democrats did the only thing left for them, leave the state and prevent a quorum and vote on stripping public employees of their union rights.


(CNN) -- Sixteen Wisconsin state senators -- 14 of them Democrats -- did not appear at the capitol Thursday for a scheduled vote on a bill that would strip teachers and other public employees of most of their collective bargaining rights and increase their contributions for benefits, lawmakers told CNN.

The bill cleared the Joint Finance Committee Wednesday night on a 12-4 vote and was intended move onto the state Senate Thursday for a vote, but the absence of so many senators left that vote schedule in question. 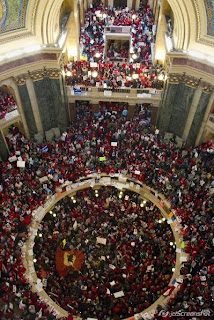 Senate Minority Leader Mark Miller said he and fellow Democrats left Madison because they were "trying to allow opportunity for democracy to work."

"We will return and do our job, but the governor has to do his job," Miller said. He noted their return is contingent on changes to the controversial legislation supported by Republican Gov. Scott Walker.

State Sen. Chris Larson (D-Milwaukee) saidWalker and other Republicans were "running the state like a dictatorship."

Larson declined to state his whereabouts or whether he was in Illinois, a rumor that spread through the Capitol. He said not all Senate Democrats were together.

"We are all standing with the people of Wisconsin -- in spirit," Larson said.

Fox News has it's own way presenting the public uprising in Madison: