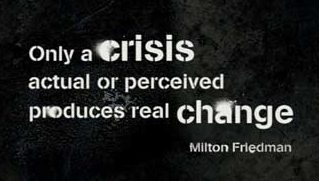 The Shock Doctrine: The Rise of Disaster Capitalism, a book by author Naomi Klein, describes what the Republican/tea party plan for America is in detail. Oddly, Klein’s observation is rarely mentioned by anyone. In a nutshell: The bigger the disaster, the easier it is to seize control of society, while the public is distracted by their narrower focus to simply survive.
With that in mind, take a look at the seeds of chaos sewn in the following cuts proposed by Republicans in the name of “freedom.” (information sourced from an ABC News article)

Reverse a proposed Obama administration rule that seeks to crack down of for-profit colleges and vocational schools … strip the EPA of its authority to issue regulations and block the implement the year-old health care law … turned back funding for the SEC and the Commodities Futures Trading Commission to pay for federal financial regulations … block Planned Parenthood from receiving any federal monies for a variety of women's health services (like) much-needed access to contraception, medical exams and counseling to women … block the Federal Communications Commission from enforcing new rules that prohibit broadband providers from interfering with Internet traffic on their networks.

Can you imagine being FOR internet providers interfering with your freedom to surf the internet? Government regulations would preserve your freedom. But that concept does not compute for anti-government, anti-regulation freedom fighters who would welcome those restrictions and increased rates based on your time surfing. That’s freedom?

Here's Naomi Klein with her interpretation of the Walker protest and huge number of citizens who are trying to be heard:

The conservative disaster capitalist agenda is clearly visible when you look at the list of cuts that failed:

Does any of this create “certainty” for Americans? Since Republicans have talked so much about business uncertainty and its drag on the economic recovery, isn't it obvious by now, that American uncertainty is not on their radar?
If anything will holdup consumer spending, a frightened, uncertain struggling public would be the driving force.
Posted by John Peterson, Democurmudgeon at 2/18/2011 10:13:00 AM