What did the Republicans expect to Gain from the Tax Cut Agreement with Obama? 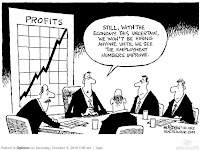 Here's a revealing piece from David Freddoso, The Examiner's online opinion editor, that says all that needs to be said about a bad deal with legs:

Liberals are livid over the tax deal President Obama has cut with congressional Republicans. Obama only added more grist to their mill with his denunciation yesterday of those who prefer "the satisfaction of having a purist position" to "victories for the American people."

Do you really want your first vote on the House floor to be an extension of unemployment benefits? President Obama has just relieved Boehner of that headache. Hopefully, he will use his majority's political capital to cut spending on higher-priority items.

First, the top marginal income tax rates -- the ones that matter most for job creators -- are being kept where they are.

Second, they have to be dealt with again in two years, which means they will be an issue in the 2012 presidential race.

Third, you prevent the top marginal rate from being decoupled from everyone else's tax rates, which could have created a situation in which the supply-side tax policy has narrower support.

Fourth, the civil war on the other side.

Finally, some extra gravy: You keep Obama's tax break for low earners. And instead of doing it with the strange, hard-to-calculate credit he created, you do it by cutting two points from everyone's payroll taxes.

In the future, I think this will be called the "Obama tax cut." As in, "Mr. Speaker, this bill would make the Obama tax cut permanent by letting workers save the money in their personal Social Security account."

For a minority party in Congress, the Republicans probably could have done a lot worse.