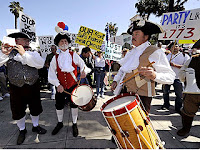 I don’t know whether it’s going to be fun or scary to watch, but I do know what happens next, may not be as easily forgotten by conservatives as the Great Recession was for them. It’s now going to be the Tea Party’s fault. Editor emeritus of The Capital Times, Dave Zweifel, wrote this interesting tale of tea party tax cuts:

The state of New York’s Nassau County has long been known as one of the country’s richest. One of the two counties on Long Island … As we know all too well, most rich people don’t like to pay taxes.  So in the fall of 2009 the residents of Nassau County elected tea party candidate Edward P. Mangano as their county executive (who) like many of the tea partyers, railed about the deficit that Nassau County had racked up and he promised to get it under control and lower taxes at the same time.

According to a story in the New York Times things haven’t turned out … Mangano did lower taxes, but he didn’t impose a hiring freeze on county government, he didn’t stop borrowing to fund what are arguably the richest school districts in the country, nor did he eliminate the Police Department’s beloved mounted unit, all of which he promised to do if elected … the county’s deficit has increased $40 million, its bonds have been downgraded, and a state of New York oversight agency is preparing to seize Nassau County’s checkbook and credit cards because the county is on the verge of a full-fledged fiscal crisis, according to the Times.

County governments, as Edward Mangano is discovering, need to eventually balance the books or pay the consequences with everything from lowered bond ratings to mediocre services. And rich people don’t like that either … tea party candidates are finding once they get into office, it’s a lot easier to shout and complain than to actually govern.