Think Wisconsin turned Blue to Red in the Midterms? It's only just the beginning...

Just how Republican red will the state be after a few years of their hard core right wing agenda? In this case, red represents poverty. Milwaukee Journal Sentinel: 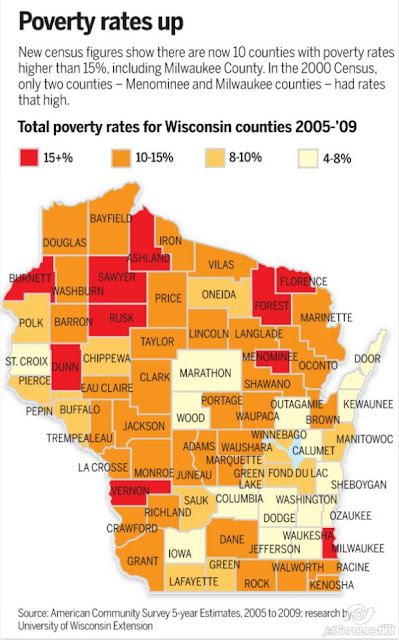 In a sign that a waning economic tide lowers all boats, the majority of Wisconsin counties saw their poverty rates increase by more than 10% since 2000, a new report from the University of Wisconsin Extension finds.

And newly released figures from the Census Bureau show there are now 10 counties with poverty rates higher than 15%, including Milwaukee County, where 18% of residents are impoverished.

In the last decennial census, only two - Menominee and Milwaukee counties - had rates that high.

I've got an idea, since the poverty level is a symptom of the private sector, let's lower the wages and benefits of public workers so we can all feel the pain of poverty.
Posted by John Peterson, Democurmudgeon at 12/20/2010 03:09:00 PM

Labels: Poverty
Email ThisBlogThis!Share to TwitterShare to FacebookShare to Pinterest