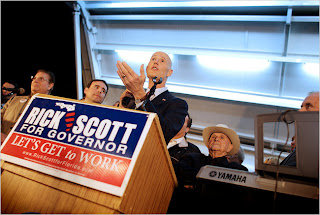 Opulence personified. As the NY Times article sets it up:


The nation’s 26 new governors have had to wrestle with a symbolically rich decision that could set the tone for their time in office: how big a party to give for themselves … Penny-pinching can convey pessimism and impotence. Lavish celebrations may telegraph triumphalism and insensitivity in these budget-crunched times.

And how did that wrestling match go between triumphalism and penny pinching with Republican governor elects?


To warm up the Florida crowds for his inauguration as governor, Rick Scott has been flying around the state this week on a seven-city “appreciation” tour. For the main event on Tuesday, he will lead a parade featuring 26 marching bands, followed by a black-tie dinner for 2,100 people, with oysters Rockefeller and fried calamari served in mini-martini glasses. “Real classy,” said Christy Noftz, who is overseeing the catering.


In Nevada, Brian Sandoval, a Republican, will host back-to-back $1,000-a-head V.I.P. receptions, one of them at the Wynn Hotel on the Las Vegas Strip.

In Oklahoma, Mary Fallin, also a Republican, has organized two “preinaugural balls,” not to be confused with the inaugural ball itself, which will be held later at the National Cowboy and Western Heritage Museum in Oklahoma City.

Now let’s see how the liberal elite plan to celebrate their inaugurations:


In New York, Andrew M. Cuomo, a Democrat, is having a small preinauguration dinner for close friends at the governor’s mansion, and has parceled out so few invitations to his no-frills swearing-in ceremony that even some top aides have not made the cut.

Jerry Brown of California has issued guidelines: no paid entertainment (a school choir will sing) and a rent-free evening reception (in a state-owned building). To highlight his thrift, Mr. Brown, a Democrat, plans to stop at a cookout after he takes the oath to snack on hot dogs and chips.

Mark Dayton, the Democratic governor-elect in Minnesota, said he considered canceling his party, which is scheduled for Jan. 8. Instead, he has authorized a “Blue Jeans to Black Tie” ball with a loose dress code and a flexible ticket price. He plans to show up in jeans and an old hockey jersey.

Borrrringggg! But let’s get back to Scott:


Then there is Mr. Scott in Florida, whose multiday, multicity inauguration has become known wryly in political circles here as the “coronation.”

Eyebrows rose anew when Mr. Scott, relying on the donated use of private planes, took his inauguration on the road … treated a largely Cuban-American crowd to giant platters of roasted pig, brown rice and boiled yucca … procession of local politicians introduced and reintroduced Mr. Scott, extolling his financial acumen and management skills … On Tuesday, for his official inauguration, Scott will hold a two-hour prayer breakfast with no fewer than 10 speakers; an afternoon concert featuring the country singers Lee Greenwood and Rockie Lynne; and a parade befitting Disney World’s home state … aides published the packed schedule on what amounted to almost 10 single-spaced pages on his Web site … a rendering of the stage being built for Mr. Scott’s inaugural ball.

This part of the Times article pretty much summed up the rage I feel right now:


Mr. Scott, after all, campaigned on a platform of fiscal restraint and small government. Businessmen like himself, he declared shortly after the election, “accept austerity as the price for dramatic turnarounds.”

Pressed about the scale of the festivities, Mr. Scott said: “It absolutely is fitting for these times. We need to celebrate how we are going to change this state.”