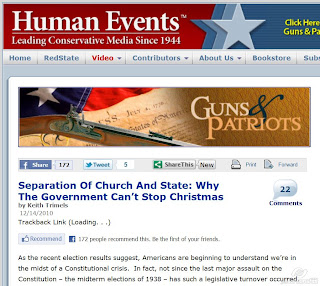 Conservative victim-hood is alive and well with the above important issue spotted by a right wingnut site. Damn, just when we thought we could stop Christmas once and for all.

Here it is, my one War on Christmas story:

Reid threatened to get tough with his power over the chamber's calendar Tuesday, when he told reporters that "there's still Congress after Christmas."

GOP Senate Minority Whip Jon Kyl quickly took offense to the notion that legislators might be expected to work after December 25 and accused Reid of potentially "disrespecting one of the two holiest of holidays for Christians."

Labels: Paranoia
Email ThisBlogThis!Share to TwitterShare to FacebookShare to Pinterest