It wasn't a Nightmare, but close: Soon to be ex-Democratic Lite Party leader Decker Stiffs State Employees, Feeds them to the GOP Sharks.

WSJ: Stunned Democrats stripped Senate Majority Leader Russ Decker of his leadership position after he abruptly turned on them and voted against new contracts for state workers Wisconsin State Employees Union executive director Marty Beil lashed out at Decker, calling him "a whore" for siding with Republicans who opposed the contracts. "There's no reason for what Decker did here tonight," Beil said. "No one saw it coming." 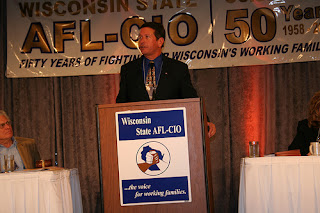 The 20-year Senate veteran lost his re-election bid in November and is out of the Legislature in three weeks anyway. Democrats returned to the floor and voted on each contract anyway. Decker and Jeff Plale voted against every one, killing them. Plale, who lost his re-election campaign as well (to a Republican), said later he didn't want to hamstring the next Legislature.