Can you imagine repealing a law that would eliminate, once and for all, offensive school mascots? I’m not kidding!! 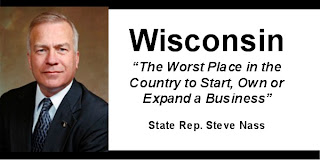 Republican Steve Nass, an outspoken enemy of public education and business in the state, wants to defend the use of racist stereotypes!!! Now that's playing to your base. So what, this election wasn’t about a conservative social agenda?
While Republicans somehow convinced voters to elect them because they knew how to manage money, even after recently tanking the global economy, the chant calling for jobs, jobs, jobs will soon become a fading memory. With the help of the media focusing on the mascot issue, public employee union busting and repealing the health care mandate, no one will remember the unemployed or the urgency of job creation.

WSJ: A Republican lawmaker wants to undo a new state law aimed at eliminating Indian mascots and other race-based team names and logos in Wisconsin public schools. Rep. Steve Nass, R-Whitewater, has drafted legislation to repeal the law, which allows any school district resident to file a complaint with the local school board over the use of offensive nicknames, logos or mascots. The state school superintendent can then order districts to stop using such symbols if they promote discrimination, harassment or stereotyping. The bill also aims to void all orders issued under the new law.

Thank god someone is speaking truth to power, the authoritarian conservative kind:

Barbara Munson, longtime member of the Oneida Nation and Wisconsin Indian Education Association, said people should be working to eliminate stereotypes, not encouraging them. She compared Nass' attempt at doing away with the law to "repealing the Civil Rights Act."

Remember, Republicans campaigned on the idea they would restore jobs and fix the budget deficit (love to see them do it without another federal stimulus bailout). Yet I’m encouraged by the fact this media article did point out each of these outrageous issues, along with Democrat Rep. Tamara Grigsby:

Democrats pounced on Nass' mascot bill … "Republicans should be creating an environment for job growth, not racism," said Rep. Tamara Grigsby, D-Milwaukee. "Yet again, we see the Republicans' radical social agenda move forward before Inauguration Day has even arrived."