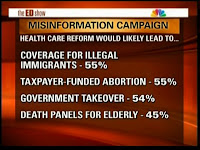 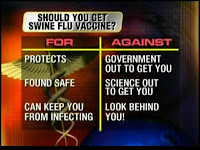 One of the major points of this blog is to call out the Republican Party for its bizarre behavior and deceptive "down the rabbit hole" world view (check out the two screen shots here, left and right, as proof). The only reason the GOP looks like a collection of fringe elements of society is because no one has reigned them in, challenged their ideas and crazy talk, which has only encouraged them to grow more extreme. Which is why I agree with the White House's approach to Fox News.

The Daily Beast wrote this about Politico's story, "Obama's Plan to Discredit GOP."

President Barack Obama has the Republican Party in his sights, and he intends to take it down. In private and in public, the White House has gone after the U.S. Chamber of Commerce, Rush Limbaugh, Wall Street executives, and Fox News. The administration's strategy is evidently to eject their adversaries from mainstream culture by dismissing their criticism as not even worth discussing. “They won—why don’t they act like it?” a former Bush press secretary said. “The more they fight, the more defensive they look. It’s only been 10 months, and they’re burning bridges in a lot of different places.” But the strategy could be working. A new ABC News/Washington Post poll found
that only 20 percent of people surveyed identified themselves as Republican—a 26-year low—while 83 percent of independents said they didn't trust Republicans to make the right decisions.

MSNBC's Lawrence O'Donnell talks to Media Matters about how quickly Fox News shed its cover of being "fair and balanced" (except for Shepard Smith and sometimes Chris Wallace).
Posted by John Peterson, Democurmudgeon at 10/21/2009 11:25:00 AM