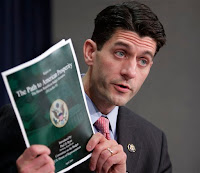 Michael Moore's new film, "Capitalism: A Love Story," features Rep. Paul Ryan pushing the Bush bailout of Wall Street. He even calls it, a "Herbert Hoover moment." Where are the tea party protesters when you need them. From Politico:

Ryan: "Herbert Hoover moment"Young conservative Paul Ryan (R-WI), who helped lead the House GOP revolt a few days ago, just made a passionate plea for his colleagues to back the bailout. "This bill offends my principles but I'm going to vote for this bill in order to preserve my principles... to preserve [the free enterprise system]," he said. "This is a Herbert Hoover moment.. he made mistakes during the Great Depression... Let's not make those mistakes... If we fail to do the right thing, heaven help us—if we fail to pass this I fear the worst is yet to come."

He then added a tart critique of the Bush administration's rush to pass the bill, saying its predictions of catastrophe if it's not passed have become a self-fulfilling prophecy. "I think the White House bumbled this thing—they have brought these issues up to a crescendo, a crisis so that all eyes are on Congress [so] we have to deal with this panic."

He went on to urge his fellow Republicans not to say, "I want you to vote for it, not me."

But in Ryan's conservative Bizarro World, only he could be named a "Taxpayer Hero."

The Council for Citizens Against Government Waste (CCAGW) today honored Rep. Paul Ryan (R-Wis.) as a Taxpayer Hero for scoring 85 percent on its 2008 Congressional Ratings. The average for the entire House was 35 percent, and the average for the Senate was 38 percent; this makes Rep. Ryan’s achievement that much more impressive.

It was a virtuoso performance. Moore was right to highlight it.

The filmmaker has given Wisconsin taxpayers a dramatic illustration of how it came to pass that we are bailing out bankers and billionaires at the same time that auto plants are closing in cities such as Janesville and Kenosha - both of which are in the 1st District.

More importantly, Moore has reminded the voters of southeastern Wisconsin how key members of Congress such as Paul Ryan determined to take care of the speculators on Wall Street rather than working families on Main Street.