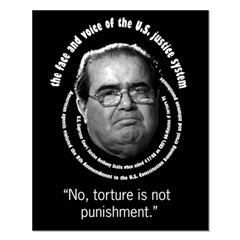 The news in the following story isn't the fact that Justice Stephen Breyer looks at the constitution as a "living document," we knew that already, but the real scoop is the open admission by activist Justice Antonin Scalia that he is a constitutional constructionist-an originalist. It is without a doubt a partisan, conservative ideological view of the constitution.

What's even more apparent is Scalia's attempt to create a fiction by reversing the reality around the idea that the rigidity of a strict interpretation, believe it or not, allows MORE flexibility. It really is just the opposite. It's down the rabbit hole again...

AP- U.S. Supreme Court Justice Antonin Scalia says those who want modern-day legal interpretations to view the U.S. Constitution through contemporary lenses are seeking rigidity, not flexibility, in the country's justice system. He told a Tucson audience that the rival approach favors sweeping judicial decrees to shape society "coast to coast" on issues such as abortion, rather than seeking to pass laws state by state.

That's an odd view since he seems to be arguing against the idea of the "federal' constitution, one that encompasses all states. On the MORE flexible side:

According to the Arizona Daily Star:

Breyer noted, for example, when the Constitution was written and people were promised “equal protection under the law.” But there was no on-going debate about same sex marriages at that time, he said. As a result, justices need to consider what the framers intended by that phrase.

Scalia disagreed. He asked the crowd to imagine having a Constitution with a footnote at the end that said ... “Equal protection means what the Supreme Court says it means from year-to-year.”

It's an unsettling statement from someone who should know better. If he had his way, the south would still be able to vote on slavery, state by state, ignoring the equal protection law. But for those looking to take on the ideological "constructionists" out there, Breyer provides a few great examples to pose in a debate:

Breyer used a hypothetical murder to illustrate his point. Criminal defendants have the right to confront their accusers in court and hearsay testimony is impermissible, Breyer said. But what happens if a woman tells a police officer her husband is going to kill her and then the husband kills her, Breyer asked. Should the police officer be precluded from testifying because the defendant has a right to confront his accuser?

Breyer also pointed out that what were once acceptable means of punishment are no longer acceptable. When asked about the death penalty for juveniles, Breyer said he doesn’t believe anyone today thinks it’s OK to execute a 13-year-old. "Where you draw the line today is not where you drew the line back then,” Breyer said.

Right... only if you're ideological enough like Scalia to believe the "all or nothing" conclusion he just painted for us.
Posted by John Peterson, Democurmudgeon at 10/27/2009 09:50:00 AM