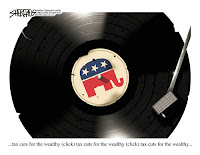 For the last century, Democrats have been trying to pass universal health care, only to be stopped by the Republican Party. Now the GOP complains the reform moving through congress is going to fast. A century is too fast? They want to slow the process down so they can read every line, subject every section to public scrutiny, and squeeze every wasteful penny out.

But wait a second. In Wisconsin, the Republican Party is complaining the stimulus money is being spent TOO SLOWLY, that it's taking too long for government officials to get taxpayer cash out there. My head is hurtng again.

Assembly Minority Leader Jeff Fitzgerald, R-Horicon, said he was concerned that the stimulus spending was taking too long and was too focused on saving jobs in the public sector.

"That's turning into a real issue with the general public," he said.

Oh, I see, they want to have it both ways. They actually think no one will notice.

For them, it's taking too long to spend money wisely. It's too focused on saving government jobs. After all, families dependent on making a living working for the state don't really contribute to the economy. They don't spend money on food, clothing and housing. They don't impulse buy things. They are parasites living off everyone else's taxes. Isn't it about time public employees work for free, like those elected officials in our state legislature? Oh, they don't work for free? They get a per diem on top of their salaries and benefits...what's that?

My guess is Rep. Fitzgerald would disagree with the administrations attempt to limit wasteful spending and creating or retaining jobs.

State officials stress that, to spend the money wisely and avoid waste, many steps have to be taken. That can include waiting for federal guidance, getting state lawmakers' approval, waiting for local schools or police to send in their plans for using the money, and then deciding how best to award it. Chris Patton, director of the state Office of Recovery and Reinvestment, pointed to federal figures that show Wisconsin, a relatively small state, ranks eleventh in the nation for its number of stimulus projects under way.

Of course we already know that Republicans would have spent all the stimulus money "like drunken sailors." They have a history of doing that.
Posted by John Peterson, Democurmudgeon at 10/18/2009 04:04:00 PM