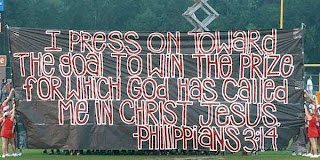 If you love the sign above, you'll be sad to hear that such messages displayed at high school football games are now relegated to the past. It took seven years before anyone noticed that something might be wrong.

So it didn't feel like wires were being crossed when, back around 2003, the cheerleaders at Lakeview Fort Oglethorpe High School began painting Bible verses on the big banners that their football team, the Warriors, would crash through under the Friday-night lights of autumn.

Donna Jackson, the mother of an LFO High student, called the school superintendent about the signs. Jackson had recently taken a law course at Liberty University, the evangelical school founded by the late Jerry Falwell. Jackson said she wanted the school to be "protected from potential lawsuits." A few days later, the school district determined that the signs violated the 1st Amendment.

I found myself wondering how it would feel driving through Fort Oglethorpe, after reading this interesting tidbit about the town:

Over at the Big Biscuit Barn (where the sign reads "PRAISE THE LORD AND EAT A BISCUIT"), owner Phyllis Cabe said the signs were "probably" unconstitutional. The back of the family SUV is painted up in pink letters: "WARRIORS STAND FOR JESUS." Down the street at Perfect Choice Family Haircutters (marquee: "THIS AIN'T NO CHAIN!!"), hairdresser Denise Yates said. "If that part of the game offends you, go turn around and buy you a Coke."

Meanwhile, another kind of sign has sprouted in the grass in front of the high school -- spelling out the name of Georgia's insurance commissioner, OXENDINE. John Oxendine, a Republican candidate for governor, is staking out a position as a champion of cultural conservatives.