What will the U.S. do with so many Unemployed People? Make them Work for Free! 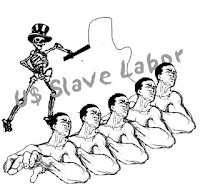 The Sunday Parade Magazine section featured this insane story last week, "Should Unemployed People Work for Free?" Where else but in Georgia would you see the idea of such a program attempted, without question, to exploit the down and out jobless.

"...in Georgia, thousands of unemployed people are working without a salary in “auditions” for paying gigs."

They call them "auditions." Preying on the hopes of the unemployed, and their undeniable desperation, employers now have a free pool of minimum wage workers.

Under the Georgia Works program, jobless citizens work part-time for up to six weeks at businesses with job openings. They earn no salary, but the state pays unemployment benefits along with a weekly stipend for transportation, child care, and other expenses. And while the businesses involved don’t issue paychecks, they do provide valuable on-the-job training, according to Michael Thurmond, the state’s labor commissioner.

Because it's an job "audition," some people are hired, which is good. But guess what, almost as many are not hired, providing free employment without benefits on the taxpayer dime. It's a shot in the arm for business, which saved $15 million overall.

So far, some 3000 Georgians (58% of participants) have been hired at the places where they started working for free. Thurmond calls it a “win, win, win” program that has helped the unemployed find work; saved employers nearly $15 million in labor, hiring, and training costs; and saved the state $5.3 million in benefits it would have paid to people who remained unemployed.

Dangling the idea of free labor, and going after the freeloading unemployed worker collecting a check, many other states see their spot in our race to the bottom.

At least 17 other states have asked about starting similar programs.

Still, there are critics. Andrew Stettner of the National Employment Law Project says that unemployed workers should spend their time looking for the right job. He fears the Georgia program could lead to mandatory unpaid work for the unemployed if it were replicated in other states. “The purpose of unemployment ought to be to enable people to search for suitable work, not to give employers free labor,” he says.