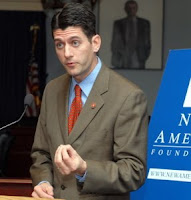 The Daily Beast must be trying so hard to be like the big guys.

In a puff piece on Rep. Paul Ryan the Daily Beast let stand an avalanche of unchallenged statements, theories easily discredited with a simple follow-up question. It's not like we don't know already that, despite causing the Great Recession, Ryan and his free market Republicans soldiers still believe their system can work if just given another chance.

First, let's take a look at one supporter who admits, he got it wrong on free markets:

“I was delighted to talk to [Ryan],” Alan Greenspan said, “because it was so refreshing to see somebody from the House who is at his intellectual level.”

Intellectually wrong on economic policy, you mean? Ryan unearths anger inducing words like "entitlement" because he's just smart enough to bring it up.

“What I see happening is the creation of a new entitlement program that’s going to be even bigger than Medicare,” Ryan, who represents Wisconsin’s recession-battered 1st Congressional District. “It’s the absolute height of fiscal irresponsibility,” Ryan went on ... "a huge new entitlement program that will accelerate the bankruptcy of this country.”

His "recession-battered 1st district" has somehow earned him six terms, when he should have been voted out long ago. And conservatives aren't shy about bragging this Ayn Rander up, despite the failure of deregulation and their economic policies.

The 39-year-old Ryan—the GOP’s “It” Boy on economic and fiscal policy—told me he isn’t persuaded by the nonpartisan Congressional Budget Office’s much-trumpeted analysis last week that the Baucus bill would actually reduce the deficit by $81 billion over the next decade. “I don’t dispute their score ... I dispute the reality of these savings ever being achieved.”

Like other Republicans, Ryan only believes the CBO's estimates when it's convenient. Ryan even betrays his own plans for reform with this unintended admission:

“Congress has a pattern of passing cuts to pay for bills and then restoring the cuts once the bill has been passed. It’s crystal-clear to me that the ‘pay-fors’ in this bill will not survive and we will have created a huge deficit-funded liability. … I see no reason why Congress would change its behavior.”

But Congress will change its behavior when Republicans pass their own plan? Oops! Ryan is quick to defend sending government/taxpayer money, a subsidy, to bribe private insurers to participate in Medicare Advantage. It's a gift that doesn't provide one penny for health care, but is a total waste of money:

"Even scarier, in Ryan’s view, is that the Baucus bill could end up effectively eliminating Medicare Advantage, a subsidized private insurance program on which 6 million seniors depend to fill the gaps in their standard Medicare coverage. “You can get $60 billion in savings from Medicare Advantage ... The Democrats hate it anyway, because it’s private, so they are killing a program that they never liked in the first place.”

Hardly anyone ... is aware of it, but Ryan actually has proposed detailed legislation to fix the ailing health-care system—albeit a free-market, consumer-driven solution that most mainstream Democrats would reject.

Ryan told me “If this thing gets defeated, then they’ll have to come and work with the Republicans and pass a bill that’s bipartisan,” Ryan said. “That’s my hope.”

What Ryan would like to see is a free market "bipartisan" bill, with no cost containment, but a private insurance industry profit bonanza.