The White House Watermelon Patch. "...You Gotta Laugh Now and Then." 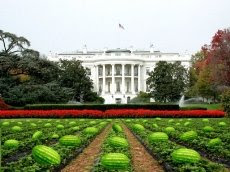 The Republican Party's attempts to reach out to minorities is off to a grand start. What is it they don't they get about being racists?

Oh I know, the picture here was meant to be funny, but certainly not something you'd find on a clan poster. Laugh!
The Orange County Register has the story:

The mayor has sent an apology for an e-mail sent to a local businesswoman and community volunteer that she says is racist and offensive. Keyanus Price, an African American, said she was appalled when she received an e-mail from Mayor Dean Grose's personal account that showed a picture of the White House with a watermelon patch imposed as the White House garden.

Grose sent an e-mail apology to Price, her boss and the City Council saying he did not intend to be offensive. He also called and left Price a message, he said.
"It was just poor judgment on my part, and I am deeply sorry," he said. "It wasn't meant to hurt her."

Grose's e-mail included the picture with a heading that read, "No Easter Egg hunt this year." She responded to the e-mail with: "Hey, that's not nice at all. Not all black people like watermelon… you should know better than that."

Grose replied: "The way things are today, you gotta laugh every now and then. I wanna see the coloring contests."

Price said Grose's response upset her more. "As soon as I saw his response; that put me over the top because it was no big deal to him," she said

Boy, some people see racism in the oddest places. Don't you wish people would stop picking on these poor victimized Republicans?

UPDATE-Huffington Post:
Los Alamitos Mayor Dean Grose issued a statement Thursday saying he is sorry and will step down as mayor at Monday's City Council meeting. Grose said he didn't mean to offend anyone and claimed he was unaware of the racial stereotype linking black people with eating watermelons.
Posted by John Peterson, Democurmudgeon at 2/26/2009 01:03:00 PM