NRC's Steele looks forward to: "...creating private sector jobs that won't go away..." You Know, Like the ones That are Going Away Now. 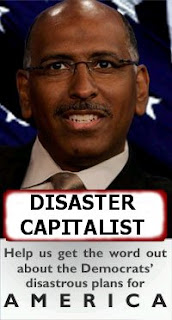 No matter what the voter message was in the last election, a repudiation of the Republican ideology, RNC Chairman Michael Steele is determined to take his party down the same road to ruin they took the country. It's not whether an idea has merit and works for the nation, it's really all about philosophy. Steele appears stuck in reverse. In his email alert, Steele parrots the same old failed ideas:

A budget watchdog group calls this bill a "lobbyist full-employment act." And at the heart of it all is the liberal Democrats' goal of the permanent expansion of the federal government's power and the redistribution of wealth. I ran for the job of RNC Chairman to lead our Party forward with its core principles as a guide: shrinking the size of government and creating private sector jobs that won't go away as soon as taxpayer money runs out.

With the private sector downsizing and consolitdating, small businesses falling to the wayside, outsourcing manufacturing jobs and insourcing cheap guest worker jobs, what part of the plan creates "jobs that won't go away?"

The Republican Party must vigorously champion these rock-solid cornerstones of the American success story.