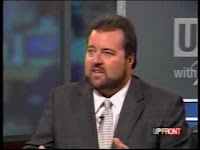 The online Capital Times story of conservative activist judge Randy Koschnick should tell you everything you need to know about the supposed “strict constructionist” interpretation of the U.S. Constitution and the pretzel logic on this ideologue. In showing his impartiality, Koschnick has accused “liberal members of the court of being ani-business. ‘(his opponents) decisions have contributed to an unstable economic climate where it’s more difficult for people to do business in Wisconsin.” Of course, there’s no actual proof such an accusation has any basis in fact. Still, Koschnick is only getting started. Let’s dig right in, shall we:

Koschnick (is) an elder at an evangelical church that espouses an anti-gay, anti-abortion agenda … Koschnick campaign spokesman Seamus Flaherty added: "I think that people of faith will like a justice who construes the Constitution as written, with all the liberties that are afforded to believers.”Koschnick concedes that the “judicial conservatism” that drives his judicial philosophy is an extension of a strong conservative bent. “My personal views are socially conservative.”

We’re expected to believe that Koschnick’s fight against liberal activist judges somehow makes being a conservative activism okay, because we know how bad liberalism is, right? How conservative?

Koschnick also has been active with the Promise Keepers, a Christian conservative men's group that urges men to take control of their households and uphold biblical notions of patriarchy. Some insight into the group's social agenda … the late Rev. Jerry Falwell once told Promise Keepers at a rally at his Liberty University: "America's anti-biblical feminist movement is at last dying, thank God, and is possibly being replaced by a Christ-centered men's movement."

Little needs to be said about how unsettling an "anti-biblical feminist" Justice would be sitting on the states highest court.

The Capital Times asked Koschnick his personal views on evolution with the aim of shedding light on whether Wisconsin voters, if they pick him, would be electing a justice who might discount centuries of scientific evidence in favor of religious doctrine. Koschnick didn't answer the question. He did say, however, that his adherence to a literal translation of the Bible is consistent with his "strict constructionist" philosophy toward laws and the Constitution, a philosophy that believes laws should be applied as written and not be subject to judicial interpretation.

Zealot fringer is the first thing that comes to mind when a person has the ability to somehow relate “a literal translation of the bible” to the U.S. Constitution. A bit unsettling. Another thing, the “philosophy” of “strict constructionism” is somehow more credible than the liberal philosophy of a “living Constitution,” even though their both…philosophy's? Here's Koschnick's example of liberal activism:

He has criticized Chief Justice Abrahamson for her decisions that he said "tie the hands of law enforcement," including her vote to disqualify testimony from victims who are asked to identify a suspect without a police lineup. The decision -- written by Justice Patrick Crooks, often a swing vote on the court -- argues that the practice of allowing such testimony is "hopelessly unreliable," pointing out that eyewitness misidentification is the greatest source of wrongful convictions in the nation.

After electing an ethically challenged Justice Ziegler and a dishonest flamethrower like Justice Gableman, Wisconsin’s system of electing Supreme Court Justices needs a complete makeover, or these self righteous conservatives will do to the courts what they did to our economy.