State Rep. Steve Nass is one of the most outspoken partisan extremists of the new radicalized Republican Party nation wide. In a recent press release Rep. Nass rabidly rants about how much he hates, truly loathes, the opposing viewpoints of lawmakers elected to carry out the duty of their more liberal constituents. It would appear only Republican voters and their representatives are qualified to make all of our political decisions for us. It’s hard to imagine the following coming from a public official elected to write and pass laws meant to help all the people. I’m not making it up:

Nass: Doyle brutally assaults the people that create good paying jobs. “Governor Doyle has caved in to the Madison liberals and socialists that despise businesses … From this day forward, almost every person that loses a job in Wisconsin can directly blame Governor Doyle and his comrades in the legislature.”

Comrades, socialists and “Madison liberals?” All this from Nass, a true believer in Fascism (Fascism is strongly associated with right-wing fanaticism, racism, totalitarianism, and violence-Encarta). So Doyle is responsible for all the job losses? That might be believed if we were hypnotized into forgetting who created the national recession and global economic crisis causing corporate closures and layoffs? Was it Gov. Doyle or the Republican Congress and Bush presidency? Nass wants you to think it was Doyle. And like all state Republicans, he also wants to make sure the rest of the country knows just how bad Wisconsin is for business. Hey nation, listen to this…:

Nass noted that Wisconsin was already one of the worst places in the country to start, own or expand a business.

Can you see the bumper sticker now? 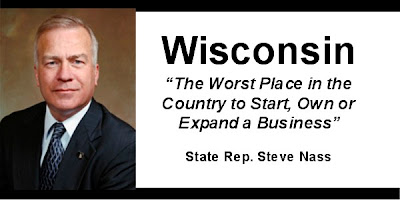 "Doyle’s … budget, if passed as proposed, will guarantee that the only jobs being created will be low-wage service sector employment or public sector jobs financed by even higher taxes."

“The new budget proposal and other ideas … prove that Wisconsin Democrats have adopted a liberal to socialist economic agenda. The taxpayers of Wisconsin will soon feel the economic tyranny that liberals in Madison have planned for them.”

Democrats are so "tyranical."

Nass also raised concerns … “Until the Republicans in the legislature admit their own past mistakes in raising taxes and supporting pork-barrel spending, it will be impossible for us to offer real policy alternatives that the people can trust. It’s all about trust and legislative Republicans must stop faking our fiscal conservatism and actually live it.”