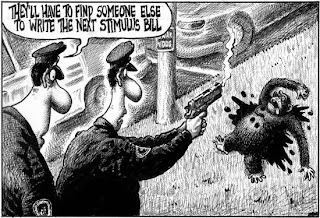 I've been documenting the subtle and not so subtle "assassination agenda" of the new Republican Fringe Party (search this blog for "assassination"). It has kicked into overdrive, first with the NY Post cartoon and now crazy Alan Keyes.

Keith Olbermann and Jonathan Alter talk about the now desperate GOP's tactics, but only touch on what I consider a death threat from Alan Keyes. It's not hard to imagine that some mentally unstable conservative will think it's his patriotic duty to save America from what Keyes describes as "a radical communist."

What God fearing patriot would not want to "stop him," as Keyes suggests, while predicting " the United States of American will cease to exist" if he isn't.