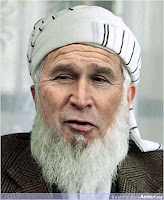 Osama bin Laden's plan was to bankrupt the U.S. by involving them in a Middle Eastern war. Well, it looks like bin Laden's plan has backfired, kind of, by also bankrupting the Taliban. Bush unintentionally used unregulated capitalism to take down the Taliban, along with everyone else. CBC News:

Even the Taliban are feeling the effects of the global financial
crisis. A Turkish militant group reported that a sharp drop in donations is hampering its fight against NATO soldiers. Just as financial support from donors in the Middle East and Turkey has dropped off, prices for ammunition and weapons on the black market are skyrocketing. A spike in the cost of copper a year ago pushed up ammunition prices, and the world's slumping economy has forced Arab donors to cut their support, said John Thompson, a Canadian military and security analyst.

"Everyone has taken a hit from the subprime mortgage crisis, and that includes the funding sources the jihadis are used to."