The Heart and Mind of a Republican: How to Cause Pain, Inflict Punishment and Demean the Poor 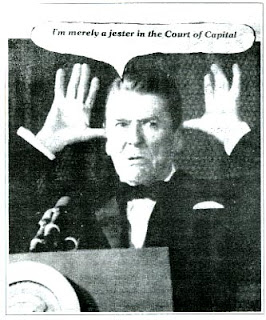 I came across a list of nighmarish highlights of a truly bankrupt Republican Party in this NY Times article. It’s really hard to grasp the cruel inhumane philosophy of these mean spirited worshippers of wealth. For them, human suffering is drain and impediment to their vision of an authoritarian elite’s control, a perfect world that is free of sympathy for the unsuccessful. Sadly, the public bought into this depraved indifference enough to have encouraged the following sick bastards included here. Always remember: It’s a world were the poor are enjoying poverty so much that they are happy to drag their family down with them. The Republicans are there to stop them.

Ronald Reagan … running for president in 1976 told what became a defining tale about the “strapping young buck” in the supermarket line who used stamps to buy T-bone steaks. His first White House budget made deep food stamp cuts.

Newt Gingrich equated food stamps and welfare, and tried to use Bill Clinton’s pledge to “end welfare as we know it” to dismantle the program. Rudolph Giuliani, in his end-welfare days as the mayor of New York, railed against a “romantic and
emotional” view of food stamps and ordered subordinates to withhold applications.
George W. Bush pushed states to cut their cash assistance rolls — citing the failures of the welfare state.

Conservatives have argued that poverty programs undermine work and marriage, and some see the stimulus bill as a stealth expansion of the welfare state. The very word, welfare, was weaponized last week. “I’m not trying necessarily to use it as a dirty word,” said Representative Jeb Hensarling, a Dallas Republican. “But if there’s a benefit that you’re getting that you don’t pay for — that arguably is a form of welfare.” (In the) recovery measures, the House version includes food stamps, unemployment benefits, Medicaid, child care, Head Start, energy assistance, homelessness prevention, disability payments and infant nutrition.

Sponsors of this spending call it a humane response to soaring hardship and an economically productive one; giving money to the poor stimulates the economy, they say, because poor people are quick to spend it. Like other House conservatives, Mr. Hensarling wants less spending and more tax cuts, for businesses and families. He is especially opposed to a refundable tax credit to low-wage workers, even if they paid less in income and payroll taxes. Supporters call it “tax relief.” But Mr. Hensarling said: “It’s welfare. Period. Paragraph.”

One side sees poverty amid plenty, and an economy that heavily favors the few even when times are good. It trusts the impulse to help. Robert Rector of the conservative Heritage Foundation released a paper slamming the House stimulus bill as a “welfare spendathon.” With an expansive view of “welfare spending,” Mr. Rector puts the bill’s two-year welfare tally at $264 billion. (He counts things like Pell Grants, which help low-income students attend college, and Community Development Block Grants, which help low-income neighborhoods finance everything from sewers to crime prevention.) “None of these programs deals with the fundamental causes of poverty, which are low levels of work and lower levels of marriage. They just say, ‘Give me more.’ ”

His liberal counterpart is Robert Greenstein of the Center on Budget and Policy Priorities. He did not strain for politeness in responding to Mr. Rector’s work. “It’s demagoguery,” he said. “There’s nothing in this package that would give people a cushion to quit their jobs and be lazy. That’s the normal implication when you wave the word ‘welfare’ around. He’s trying to conjure old images of welfare queens. He’s waving the bloody shirt.”