The 1903 Electric Car. The Missed Opportunity 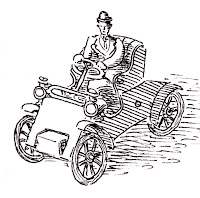 My son surprised me the other day when he opened his library book, "Who was Thomas Alva Edison? by Margaret Frith, to a page describing Edison's attempt at developing the electric car. Edison just missed the chance to change history and the worlds energy dependence on oil, by not beating Henry Ford's mass production of the gasoline powered car by 1903. Here's an exerpt:

Now it was the turn of the century. Automobiles were about to burst on the scene. Tom was convinced that an electric car would be the best car for the future. He set out to make a battery to run a car on electricity. He knew it would be cleaner than the gas that other inventors were trying. But he had to make a battery that would store enough electricity to run a car for a very long time. It also had to be cheap enough to make.
Tom finally came up with a good storage battery. But he was too late for cars. By 1903, Henry Ford was selling his gasoline-powered Model A to costumers.
Amazingly, the storage battery became his biggest moneymaker.
Think of where we would be today had we dealt with the development of a high mileage battery as far back as 1903.
Posted by John Peterson, Democurmudgeon at 2/27/2009 09:30:00 AM