Americans Can Learn Something From The Irish Labor Uprising 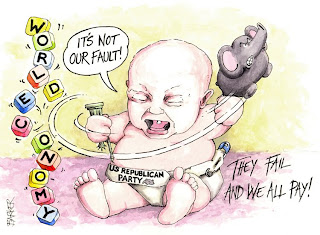 While we have seen other countries citizens marching in protest over voter corruption and food prices, Americans hang back, taking a more wait and see attitude while their position in society diminishes.
While Americans fall in line with the angry right wing talk radio hosts rant against unionized auto workers and the foreclosed, the Irish have decided not to take it. Instead of believing in the recently failed Republican philosophy, the Irish know they are getting the short end of the stick. According to CBC News:

About 100,000 people filled the streets of the Irish capital Saturday to protest against the government's handling of the country's economic crisis, police said. The march through the heart of Dublin — organized by the Irish Congress of Trade Unions — was meant as a warning shot to the government, which wants to cut public-sector pay even as it pumps billions of euros into its troubled banks.

The government has argued that wage reductions are needed to keep Ireland's ballooning deficits under control and reassure international markets that Ireland isn't spiraling toward a default. But the plan, which effectively docks seven per cent from the paychecks of 350,000 Irish workers, comes amid revelations of shady dealings and irresponsible lending at the banks now getting taxpayers' help.

Ireland once had one of the fastest-growing economies in Europe, but boom turned to bust last year as shockwaves from the subprime lending crisis in the United States spread across the globe. Organizers originally planned the demonstration as a protest over the wage cuts, but later called on all Irish workers to turn out in a show of strength. "Our generations yet unborn have been mortgaged in order to keep this banking system together," Congress of Trade Unions general secretary David Begg told cheering crowds at Dublin's Merrion Square.

The unions are hoping the turnout will convince the government that organized labour is ready to strike if its demands are ignored.

God I’d give anything to see this happen in the U.S.. Instead, I have a sinking feeling our absence in the streets might be a sign were letting it all slip away. Maybe writing this blog is keeping me from hitting those streets…
Posted by John Peterson, Democurmudgeon at 2/22/2009 07:14:00 PM