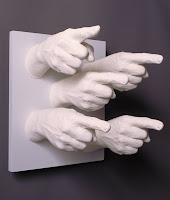 In one of the biggest switcheroos, flip flops, reversals or takebacks, the tough on crime Republicans are now saying just the opposite. In fact, they are blaming liberals for their own tough on crime, lock 'em up, throw away the key mistake. NY Times:

In the next several months, the Supreme Court will decide at least a half-dozen cases about the rights of people accused of crimes involving drugs, sex and corruption.

Get this, there is now:

…an emerging consensus on the right that the criminal justice system is an aspect of big government that must be contained. The development represents a sharp break with tough-on-crime policies associated with the Republican Party since the Nixon administration.

Edwin Meese III, who was known as a fervent supporter of law and order as attorney general in the Reagan administration, now spends much of his time criticizing what he calls the astounding number and vagueness of federal criminal laws. Mr. Meese once referred to the American Civil Liberties Union as part of the “criminals’ lobby.”

It is utterly jaw dropping how Meese spins the GOP's "tough on crime" image used to defeat Democrats, as a liberal Democratic problem. It's masterful and completely deranged:

These days, he said, “in terms of working with the A.C.L.U., if they want to join us, we’re happy to have them.” In an interview at the Heritage Foundation, a conservative research group where he is a fellow, Mr. Meese said the “liberal ideas of extending the power of the state” were to blame for an out-of -control criminal justice system. “Our tradition has always been,” he said, “to construe criminal laws narrowly to protect people from the power of the state.”

Radley Balko, a senior editor at Reason, a libertarian magazine. “The more vocal presence of conservatives on over criminalization issues is really what’s new.”

Remember it was always crazy for Democrats to promote rehabilitation, that was for wimps:

Some religious groups object to prison policies that appear to ignore the possibility of rehabilitation and redemption, and fiscal conservatives are concerned about the cost of maintaining the world’s largest prison population.

Some scholars are skeptical about conservatives’ timing and motives, noting that their voices are rising during a Democratic administration and amid demands for accountability for the economic crisis. Meese acknowledged that the current climate was not the ideal one for his point of view. “We picked by accident a time,” he said, “when it was not a very popular topic in light of corporate frauds.”