Al Gore is only Telling us Half the Story. It's the Air We Breath that's Killing Us. 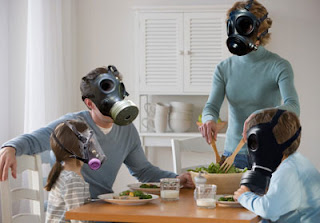 The following story is something I've been trying to get my conservative friend to think about every time he emails me the latest proof climate change is a liberal conspiracy. It's simple logic.
We are always getting air quality alerts due to harmful particulates in the air we breath. It's from pollution, and it's getting into our bodies. Forget about climate change, think about dying from a disease caused by pollution.

"AP-Cutting global warming pollution would not only make the planet healthier, it would make people healthier too, newly released studies say. Slashing carbon dioxide emissions could save millions of lives, mostly by reducing preventable deaths from heart and lung diseases, the studies show.

Cutting carbon dioxide emissions would also reduce other types of air pollution, especially tiny particles that lodge in the lungs and cause direct health damage, doctors said. "Reducing greenhouse gases not only helps save the planet in the long term, but it's going to improve our health virtually immediately," said Christopher Portier, associate director of the U.S. National Institute of Environmental Health Sciences. And for places like the United States, those advantages of reduced heart and lung diseases are bigger than the specific future health damage from worsening warming, Portier said.

"Here are ways you can attack major health problems at the same time as dealing with climate change," said lead author Dr. Paul Wilkinson, an environmental epidemiologist at the London School of Hygiene and Tropical Medicine."
Posted by John Peterson, Democurmudgeon at 11/25/2009 10:34:00 AM