A Look Back: Rep. Ryan Lied About Obama with Spending Chart 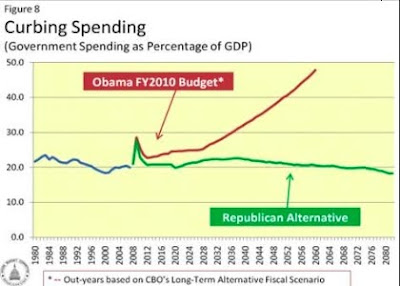 According to TPM, Rep. Ryan has a tendency to LIE.

Back in the Spring, when Democrats were putting together the federal budget, House Budget Committee ranking member Paul Ryan (R-WI) released a much-mocked Republican alternative, which would have basically canceled the stimulus and instituted a spending freeze of sorts. The ideas in the Republican alternative budget were roundly rebuked by experts, but Ryan wasn't deterred. Instead of accepting defeat, he unveiled some graphs suggesting that, under Republican budgets, spending would be restrained, while under Democratic budgets, it would blow through the roof.

Except his numbers weren't based on any analysis at all. Instead, Ryan used CBO numbers through 2018 and then drew an upward-sloping line on the graph completely at random.
It didn't take long for Republicans to catch on and begin claiming that Democratic policies would make government spending half of GDP before the end of the century.
Posted by John Peterson, Democurmudgeon at 11/28/2009 12:02:00 AM