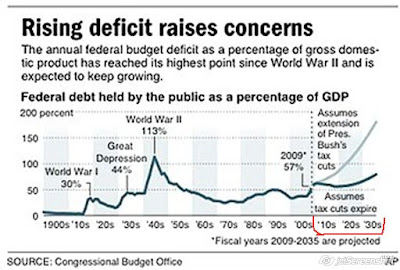 Rep. Paul Ryan's Alice in Wonderland, upside down, through the looking glass, down the rabbit hole Ayn Randian world is showing some major fault lines. If even I can identify bad math and twisted logic, then something is dangerously wrong with this guy. Let's take two recent points he made in the Journal Times, reprinted on The Hill:

* Support Real Policies for Growth. Fast-acting tax policy - such as allowing expensing on all new investments - would boost incentives to expand business operations and create jobs. In addition, lowering the corporate income tax rate - currently the second highest in the industrialized world - would help attract investment in the U.S., and reduce the incentives to shift business operations and jobs overseas.

It always seemed odd to me that Republicans are as mad as hell over high corporate taxes, and want them changed, while not advocating change to the worlds most expensive for profit health care system. It can't be good for business, can it?

* Provide Tax Certainty. Due to next year's expiration of past tax laws, the Majority is set to hit Americans with new tax increases on investment, savings, businesses, families and workers. This threat is stifling business investment and job creation today because of the uncertainty in tax laws. Congress should permanently extend the current tax laws and drop its insistence tax increases. This would serve as a de facto tax cut, increasing the after-tax rate of return on investment and unlocking billions in private, idle capital.

Besides the fact that everything in the above statement is bad policy, Majority Republicans wrote into law the expiration of the Bush tax cuts. The tax cuts were meant to help us out of the first Bush recession, which apparently didn't work out real well. Then Ryan deliriously says business is uncertain about the expiring tax laws, because …they're not sure if the tax laws are expiring? Pull yourself together man. The graph above demonstrates what would happen if the tax cuts were extended indefinitely. He is CRAZY. The capper:

If the Majority puts aside its ideological commitment to growing government, these ideas could be included in bipartisan solutions to bring jobs back into our economy.

Ryan's solution is to set aside the Democratic solutions to our nations problems, the elected Majority, and put in place the scatter shot minority Republicans free market ideological theory that got us into this mess in the first place.