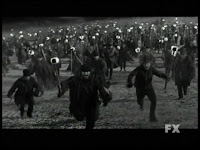 Remember when the Republicans were outraged at proposed "cuts" to Medicare? They were the great protectors of senior citizens everywhere. Sure it flew in the face of a half century of trying to dismantle it, but that's beside the point to the major media outlets. Confusing? Maybe to everyone but the anti-government conservative movement of tea partiers, baggers and birthers. You want proof:

Capital Times editorial: How wrong are the critics of health care reform? Dangerously wrong - especially if you are a senior or an American with a disability.

When opponents of reform showed up this week at House Appropriations Committee chair Dave Obey's Wausau office, they didn't just advocate for blocking the House bill that would expand access to care. The anti-reformers - who arrived at the behest of the Republicans in Washington and their allies in insurance industry front groups - announced that they do not merely want to block the reform bill that is likely to be voted on this weekend. They also want to see Medicare, the health care safety-net program for America's seniors, repealed.

Obey spoke to them by phone and even celebrated their right to express their unpopular views. But the congressman added: "Make no mistake about it, the vast majority of people in the 7th District do not favor repealing Medicare and they do not favor the status quo when it comes to health care."

"… when it comes to Medicare, not only do we have to protect it, we have to strengthen it to make sure that it continues to be there for all Americans."

As for the foes of reform, they are starting to show their true sentiments.

And yet for awhile, Republicans gained traction by giving the impression they wanted to protect Medicare.