Christmas Music After Halloween? There Oughta Be a Law Against It. 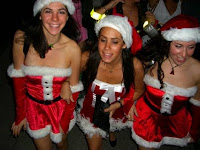 I'm sad that we're losing the Thanksgiving holiday. It's now something "in-between" Halloween and Christmas. My point here is that it should be illegal to start a holiday before the last holiday, punishable with a fine and prison time, or something like that.

It used to be that Thanksgiving trumped post-Halloween décor, but Santa seems to have taken over by early November. Madison radio station WOLX started playing Christmas music on Nov. 5. The station plays the music almost two months before Christmas because "there's significant demand for it."

(Gift shop Tellus Mater Inc. said in a statement) "I think people are trying to find things early before they run out."

But saner heads can prevail if we all push hard enough, like Tanner Gregory:

It's time for congress to make a national law officially starting all holidays the DAY AFTER the last. Making it a felony to start early is not unthinkable.

Agreed? Now, here's another disgruntled lover of Christmas, coming out.

Globe University, La Crosse: That being said, Christmas should get a month and no longer. Some grumpy folk even argue that a month is already too much yuletide for their liking. So seeing as it’s November 24, exactly one month before Christmas Eve, all the festive decorations and happiness should just be going up now – which makes me wonder why there have been little signs of Christmas popping up all over campus since Halloween. That’s why I’m going to pull a Grinch and present you with a List of Christmas Stuff on Campus That’s Awesome But Arrived Too Early and is Already Trite.

1.) The Christmas Starbucks Cups
I already mentioned in a previous post that the most wonderful day of my entire year is the day that Starbucks whips out those red cups with the little snowflakes all over them. Just ask AbstractNoun, who completely understood what was going on when we walked into Starbucks about a month ago and I started shrieking, “Cups! Cups!” Yes, I said a month ago, which means that by the time February rolls around I just may start to resent the cups, which would be completely devastating.

2.) Douglas’s Bizarrely Intense Window Display
Really, is it necessary to plop not one, but two singing Santas in your window display in October? It wasn’t even cold enough for Uggs yet when a man in an elf suit attacked me with “15% off all Clinique products” candy canes.
Posted by John Peterson, Democurmudgeon at 11/13/2009 11:42:00 AM