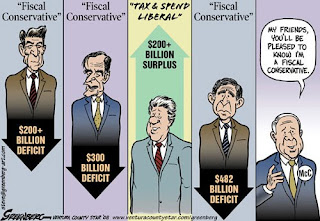 Has Wall Street been regulated or have attitudes changed? No.

The stimulus is a philosophical wedge issue, not an actual solution. Republicans won't allow the Democratic platform a chance to pass or fail, while we already know how their platform crashed. So what's the hold up? The following article written before last years election offers some insights into ways we can maybe move ahead.

Michael Porter, Professor at Harvard Business School in Business Week:
SAME OLD ARGUMENTS: We need a strategy supported by the majority to secure America's economic future. Yet Americans hear the same old divisive arguments. Republicans keep repeating simplistic free-market thinking, even though the absence of all regulation makes no sense. Self-reliance is preached as if no transitional safety net is needed. Some Republicans even argue passionately that the country should have no strategy because that would be "industrial policy." Yet the real issue is not picking industry winners and losers but improving the business environment for all American companies, something we cannot do without identifying our top priorities. Overall, Republicans seem to think business can thrive without healthy social conditions.

Democrats, meanwhile, keep talking as if they want to penalize investment and economic success. Democrats equivocate on trade in an irreversibly global economy. They seem to think social progress can be achieved only at the expense of business.

Efforts under way by both parties are largely canceling each other out. A strategy would direct our spending to priority investments that also put money into the economy, such as educational assistance and logistical infrastructure, rather than tax rebates.

Is such strategic thinking possible, given America's political system? It happens in other countries—Denmark and South Korea are just two where I have participated in serious efforts by national leaders, both public and private, to come together and chart a long-term plan. This almost never occurs in the U.S., except around single issues.
Posted by John Peterson, Democurmudgeon at 11/17/2009 12:04:00 PM