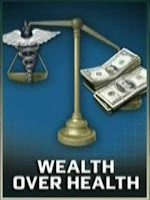 For your information, a quick look at the cost of premiums under the proposed health care legislation from AP. Despite the fact that it dramatically reduces costs, people are still complaining. Go figure. Check out the Kaiser Foundation PDF, comparing both plans, that are updated after any new changes.

Q: How affordable is the new middle-class coverage going to be?

A: Most people would remain in their employer plans. Self-employed people and those working in small businesses would be able to buy coverage through a new insurance marketplace, with government subsidies available for many.
The aid is substantial for lower-income households, but drops off rapidly for the middle class.

That's a bargain compared to current rates, which can top $1,000 a month, but it still may be too much for some family budgets. About one-third of the uninsured say they'd be able to pay $200 a month in premiums, and only 7 percent say they can afford $400.

Q: These bills are going to ban pre-existing conditions, right?

Both bills would forbid insurers from denying coverage to people in poor health or charging them more. That would happen in 2013 under the House bill, and 2014 in the Senate's. The reason for the delay is that it would be unfair to require insurers to take all applicants right away. The sick would sign up, but healthy people would probably wait until they faced the threat of government fines. Such a situation could raise premiums for everyone.
Posted by John Peterson, Democurmudgeon at 11/28/2009 11:28:00 AM