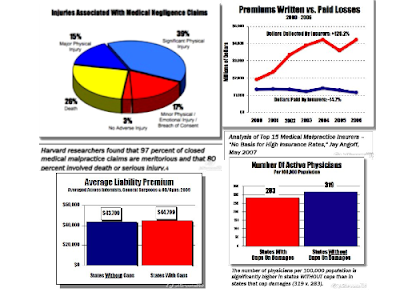 What is it about the conservative concept of the constitution that pushes the idea of freedom, but denies you and me our rights? They're getting away with this scam. Click on picture for larger view.

A recent bill by Republicans to add limits on medical-malpractice suites to reform and narrow the window for filing suites failed because Democrats decided to give Americans their day in court and to receive just compensation. Maybe doctors need to cut down on the tens of thousands of medical errors every year, ya think!

Facts always get in the way. Here's a list of results from recent studies. Cut and paste, send it to a tea bagger. From the American Association of Justice:

MYTH #1: THERE ARE TOO MANY “FRIVOLOUS” MALPRACTICE LAWSUITS

The reality is, there is an epidemic of medical negligence, not lawsuits. Two seminal studies of the patient safety movement have shown that not only are hundreds of thousands of patients injured every year in the health care system, but very few of them sue. According to the Institute of Medicine, 98,000 people die in hospitals each year as a result of preventable medical errors, costing the health care system $29 billion in excess costs.

Hundreds of thousands more suffer non-fatal injuries. Despite the massive number of medical injuries, medical malpractice lawsuits are uncommon. According to researchers at Harvard, only one in eight people injured by medical negligence file a malpractice claim.

Researchers at the Harvard School of Public Health examined over 1,400 closed medical negligence claims and found that 97 percent of claims were meritorious and that 80 percent involved death or serious injury. According to the authors, “portraits of a malpractice system that is stricken with frivolous litigation are overblown.”

Reformers allege that this “defensive medicine” accounts for 10 percent of health care costs. The problem with this concept is that the vast majority of academic and government research has found that: Much of what can be identified as “defensive medicine” is motivated not by liability concerns but by the desire to generate more income.

The threat of liability may actually improve health care outcomes. Researchers have found that a 10 percent increase in malpractice costs actually reduces mortality by 0.2 percent, In 2007, the most recent year for which data are available, there were 941,304 physicians in the U.S., nearly 20,000 more than the year before.

Following the enactment of the cap, GE Medical Protective, the nation’s largest medical malpractice insurer, told the Texas Insurance Commissioner that caps had a negligible impact on rates and announced a 19 percent increase in doctors’ premiums. After t he company’s rate hike request was denied, they announced intentions to use a legal loophole, avoiding state regulation, and increased premiums 10 percent – without approval. Texas legislators were eventually forced to threaten the insurance companies with mandatory rate rollbacks if doctors did not see significant rate relief.

Sherman “Tiger” Joyce, president of the American Tort Reform Association, admitted to Liability Week that tort reform measures do not reduce insurance premiums, saying, “We wouldn’t tell you or anyone that the reason to pass tort reform would be to reduce insurance rates.” Similarly, Victor Schwartz, general counsel of ATRA, told Business Insurance that, “[M]any tort reform advocates do not contend that restricting litigation will lower insurance rates, ‘and I’ve never said that in 30 years.’