Global Warming Conspiracy Plot to Destroy U.S.! Paranoia, not Science is the Problem. 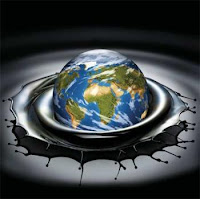 I've always wondered why people fight so hard not to develop clean sources of energy by denying global warming, climate change or even air pollution. I couldn't make any sense out of the idea that we should leave our energy decisions up to mega big oil and energy who's only purpose is to make a profit from maintaining the status quo. Why would liberals, and now they claim conservatives too, want to destroy the worlds economies? Here's the answer from radio whack job Alex Jones:

Climate Gate is YOUR fight; The Blood of Patriots and Tyrants
The globalists, the eugenicists, are in this for the long haul. All of their eggs are in the climate hoax basket. They’re not going to stop now. Why would they? We all know this was never about climate change in the first place. No, what this is and always was about is an excuse for global government. This they certainly do not deny. Ban Ki-Moon, the UN Secretary General, penned an op-ed in the New York Times last month in which he called for a global government funded by carbon taxes.

The globalist plan for world government – the elimination of national sovereignty, ie the destruction of the United States of America – must be fully exposed. We know that this scheme is completely unknown to the vast majority of people. Perhaps now that Glenn Beck is finally speaking of this conspiracy, the Fox “News” crowd will get their heads out of their rears and realize it’s not “liberals” behind this, it’s globalists – there are prominent Republicans and so-called conservative leaders pushing this as well.

Is that what liberals and every country in the world want, the total destruction of of the U.S.? Could it be this conspiracy theory, or "scheme," is unknown for one good reason-it's crazy ! And what does it say that Glenn Beck is pushing the conspiracy? Can you say Howard Beale?
After reading through the many email "proofs" reprinted at Jones' web site, supposedly pointing to attempts to cover up information, I don't see it. It's pure hyperbole.
Posted by John Peterson, Democurmudgeon at 11/28/2009 09:37:00 PM