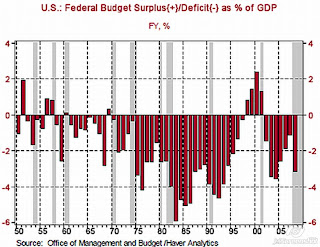 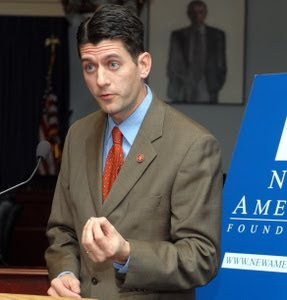 Hey Rep. Paul Ryan, reality is knocking, will you answer it?
Paul Ryan wrote it this way in the Wall Street Journal:

Why all the pessimism? The source appears to be a growing fear that the federal government is retreating from the free-market economic principles of the last half-century, and in particular the strong growth policies that began under Ronald Reagan.

Exhibit B is tax policy going forward. It is a near certainty that Democratic-controlled Congress will allow most of the tax cuts of 2001-2003 to expire on Dec. 31, 2010.

Exhibit C is the administration's intervention in the GM and Chrysler
reorganizations. Upsetting decades of accepted bankruptcy law, the administration leveraged TARP funds to place unsecured and lower priority creditors like the United Auto Workers union in front of secured and higher priority creditors. Gary Parr, deputy chair of the mergers and acquisitions firm Lazard Freres & Co., stated the problem more directly. "I can't imagine the markets will function properly if you are always wondering if the government is going to step in and change the game," he was quoted in The Atlantic Online in September. These investors understand a simple truth that current Washington policy makers fail to grasp: When you repeal the Reagan economic program, you repeal its results.

Don't you just love the quote from Gary Parr from Lazard Freres & Co. "I can't imagine the markets will function properly if you are always wondering if the government is going to step in…" Like the market worked out so well when the government DIDN'T step in to change the "game." It tanked the world economy. Hello, is anybody in there?

But in an opinion piece from the Plexus Group, Asha Bangalore of The Northern Trust Company, Rep. Ryan looks the total fool. Here are just a few highlights.

The main theme of the opinion piece by Representatives Hensarling and Ryan is poor economic policy choices of the current administration. To make their case they focus on the Reagan administration’s successful economic policies. It is well known that the federal budget deficit as a percentage of GDP during the Reagan years has been the largest in the entire post-war period ending 2008. Therefore, from a fiscal perspective, the perceived success of economic policies of the 1981-1988 period is not a resounding success.

“Exhibit B” of the article notes that “[i]t is a near certainty that Democratic-controlled Congress will allow most of the tax cuts of 2001 2003 to expire on December 31, 2010.”

Moreover, the contribution of business investment to economic growth in the March 1991-March 2001 period surpasses the 1982-1990 and 2001-2007 economic expansions. Therefore, economic history paints a very different picture from the opinion piece of representatives Hensarling and Ryan. Should political leaders be engaged in partisan rhetoric or in a serious discussion of how to make policy choices that will foster sustained economic growth?

Asha Bangalore is vice president and economist at The Northern Trust Company, Chicago.
Posted by John Peterson, Democurmudgeon at 11/23/2009 01:39:00 PM