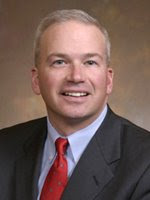 After holding the states budget up, turning down additional sources of general revenue and crippling state government with more draconian cuts, Senate Minority Leader Scott Fitzgerald now worries there just isn't enought money to go around to pay for things.

Incredibly, Sen. Fitzgerald is oblivious to the irony of his comment. Democratic Gov. Jim Doyle had to axe $103 million from the DOT because the Republican Assembly left a $270 million hole in the budget due to the Bush economy. According to Wispolitics.com, Fitzgerald worries that road and transportation infrastructure repair would suffer just when needed most.

No kidding? Maybe we should get the extra money for concrete from our education budget or pull a few people off Medicaid and Badger Care?