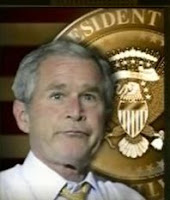 President Bush tried to pin the blame on the Democratic Congress for soaring energy prices …
I have had it, and so should every American listening to the sound of that partisan incompetent brainless phony, otherwise known as President Bush. These god damn Republicans can’t take responsibility for anything, especially their collapsed economy, the one they controlled and steered us into for the last 7 years.
Is he serious? After losing control of the economy, and pushing the dollar lower than it’s been in years, gas prices took off dramatically worldwide. And now it’s the Democrats fault. MY BRAIN IS HURTING.
This is disaster capitalism, where free market zealots step in to take advantage of a catastrophe, in this case, demand we lift long-standing restrictions on drilling for oil in pristine lands and offshore tracts believed to hold huge reserves of fuel.
Will the press please stop acting like nothing is happening here, and pretending Republicans have an honest viable opinion? They are trying to rape this country and to turn all our resources over to the oil industry. Why, because they’ve got a chance to grab for the brass ring one more time before they’re thrown out of office.
"It's time for members of Congress to address the pain that high gas prices are causing our citizens," the president said.
You caused this you lame brain. Every time Iran sneezes the price goes up at the pumps. Every time you threaten anyone and everyone in the Middle East the price goes up again. You really think we’re idiots.
Suddenly, Bush is catching on to what Democrats have been saying for the last 7 years. Bush had the balls to say, "Every extra dollar that American families spend because of high gas prices is one less dollar they can use to put food on the table or send a child to college. The American people deserve better." Bush said that Democrats are at fault.
I’m mad, and I’m not going to take it anymore.
According to AP, the spineless "Democrats say they are for drilling, but argue that oil companies aren't going after the oil where they already have leases. So why open new, protected areas? they ask."
Stop asking and tell people the truth. That these worthless Republicans are completely out of control, and cannot be relied upon to fix this or any other problem they’ve created.
According to the Washington Post, “The Energy Department's Energy Information Administration [EIA] said that .... 'Because oil prices are determined on the international market, however, any impact on average wellhead prices is expected to be insignificant.' "

Media Matters reports, “The article also noted that the EIA said that "access to the Pacific, Atlantic, and eastern Gulf regions would not have a significant impact on domestic crude oil and natural gas production or prices before 2030. Leasing would begin no sooner than 2012, and production would not be expected to start before 2017." Both quotes come from the "Issues in Focus" section of the EIA's Annual Energy Outlook 2007 report.
Posted by John Peterson, Democurmudgeon at 7/12/2008 07:49:00 PM