Bush Nude Pic, Artistic Protest Not for Children, Taken Down 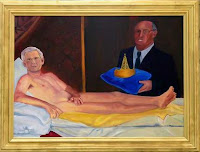 Parents might have been a little anxious explaing the nude picture of our current president to their children, so the cartoonish depiction had to come down. Here’s the story from AP:
A cartoonish painting of US President George Bush in the nude has been taken down from the wall at the City Museum of Washington. The picture, titled Man of Leisure, King George, adopts the pose of a famous Impressionist painting, Edouard Manet's Olympia, that scandalised Paris in 1863, and now hangs in the Gare d'Orsay Museum in Paris.
The painting by local artist Kayti Didriksen, shows a caricature of Bush, reclining in the nude on a chaise lounge, his head propped up by pillows. Instead of the female servant who stands behind Olympia's couch, a man in suit and tie resembling Vice-President Dick Cheney stands nearby, holding a cushion with a crown and a miniature oil rig on top of it.
The painting was part of a "living room art" show called Funky Furniture - a variety of painted furniture and other items that were set up in the museum last week. The show was abruptly shut down after some of the artists' themes were considered unsuitable. The exhibit was not what had been expected.
According to the museums public relations rep., "The museum is not an art museum. It gets mostly groups of children, with teachers trying to tell them something about history." "We thought we were getting functional furniture," Leslie Shapiro, co-chairman of the museum's board of directors, told the Washington Post.
In addition to the Bush painting, the exhibit included a decorated church pew with pictures and writing that accused former president Ronald Reagan of ignoring the AIDS crisis and an end table decorated with drug paraphernalia with a quote from former Washington, DC mayor Marion Barry, who was jailed for drug possession.
Posted by John Peterson, Democurmudgeon at 7/16/2008 10:33:00 AM