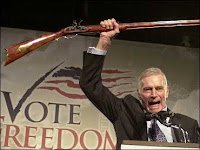 1. Just how fiscally responsible are Republicans? Let’s look at the candidate and his backers. Speaking of taxes in Colorado, Sen. John McCain said: "I want to look you in the eye: I will not raise taxes or support a tax increase." The AP reports that in last January's Florida primary, McCain finished second among voters who said cutting taxes was a higher priority than reducing the deficit.
Conservative voters would rather cut taxes than pay their bills. That says a lot, doesn’t it? They would much rather spend than pay up.
2. The same goes for Social Security. The answer is simple: raise the cap on the payroll tax a little or a lot. This isn’t brain surgery. Republicans won’t have any of it, for the simple reason solving the problem doesn’t do away with the program. A McCain spokesman said, "There is no imaginable circumstance where John McCain would raise payroll taxes. It's absolutely out of the question."
Thus no solution except for the “tough” ones that reduce benefits that are already too low, and to raise the benefit age. These are ugly options meant to anger and frighten the public. And that's what they want. A desperate person will make any kind of deal, even one that leaves them at risk of losing everything.
3. But for the best attack ads, facts are cast aside for a good yarn, like comparing Barack Obama to Britney Spears. I’m not kidding. A McCain ad shows Obama and the massive crowd at his speech in Berlin, where almost 200,000 people showed up to hear him speak. Announcer: "he's the biggest celebrity in the world," while shots of Britney Spears and Paris Hilton appear on the screen. "Just because you're a celebrity doesn't mean you're ready to lead," campaign manager Rick Davis told reporters in a conference call about the ad.
I get it; Democrats love and hang with phony Hollywood types, like Gov. Arnold Schwarzenegger, Pres. Ronald Reagan, Sonny Bono, Clint Eastwood, Fred Thompson, Chuck Norris and Charlton Heston. Oops sorry, wrong Hollywood list of celebrities.
Posted by John Peterson, Democurmudgeon at 7/31/2008 12:48:00 AM