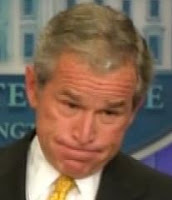 Let’s look at what was said by the Republicans at the House hearing on executive power, and their cavalier and dismissive attitude toward the alleged crimes of the past eight years by the Bush administration. But first, the opening statement from the Democrat in charge, as reported by CBS News.

"To the regret of many, this is not an impeachment hearing," said committee chairman John Conyers, D-Mich., pointing out the less incendiary title of the event, "Executive Power and its Constitutional Limitations." House rules prohibit "personal abuse, innuendo or ridicule of the president." The House Rules and Manual points out that suggestions of mendacity, or accusations of hypocrisy, demagoguery or deception were out of order. In other words, no one could accuse the president of committing high crimes or misdemeanors, if they weren’t actually voting on whether he committed high crimes or misdemeanors.
So now a review of the arrogant, dismissive comments put forth by the Republicans representatives, with the hope that their words are reflected in the text of future history books documenting this nations darkest moment.

Rep. Dan Lungren, R-Calif., called it "impeachment lite," where people were given free rein to impugn Mr. Bush but not to impeach him.

Rep. Lamar Smith of Texas, the committee's senior Republican said, "It seems that we are hosting an anger management class. This hearing will not cause us to impeach the president; it will only serve to impeach Congress's credibility."

One witness, George Mason University School of Law professor Jeremy Rabkin commented, "I am really astonished at the mood in this room. The tone of these deliberations is slightly demented. You should all remind yourselves that the rest of the country is not necessarily in this same bubble in which people think it is reasonable to describe the president as if he were Caligula."

Rep. Steve King of Iowa challenged Bush’s critics for saying he lied during his 2003 State of the Union Address, when he spoke the infamous “16 words” claiming that Saddam Hussein had sought weapons-grade uranium from Niger. (That was) despite investigations from weapons experts that determined such reports were false. King pointed to a recent article about a secret effort to remove older uranium yellow cake from Iraq, and alluded that it represented a “significant” amount that supported Mr. Bush’s claim, ignoring the fact that the uranium dated from the 1991 Persian Gulf War and had long been known to U.N. weapons inspectors.

Let it be recorded and a part of the Republican legacy that allowed this abuse of power to happen on their watch in Congress. Let it also be noted that the attack on 9/11took place on their watch, making irrelevant their record that we haven’t been attacked since.

Meanwhile, hundreds of activists spilled out of the committee room and lined the hallways outside. T-shirts reading "Arrest Bush" and "Veterans for Impeachment" illustrated the sentiments of many.

And there apparently was nothing in House rules preventing opinions: as when Rep. Zoe Lofgren, D-Calif., asserted that Mr. Bush was "the worst president that our nation has ever suffered." Also testifying was former Congressman Bob Barr of Georgia, who helped lead the Republicans' impeachment fight against President Bill Clinton. "The separation of powers, with the checks and balances expected to naturally follow, is the bedrock foundation of American constitutional government. It is a foundation clearly in danger of crumbling."
Posted by John Peterson, Democurmudgeon at 7/26/2008 11:11:00 AM