Will McCain Cover Parody in Vanity Fair Get as much Play as Obama’s? 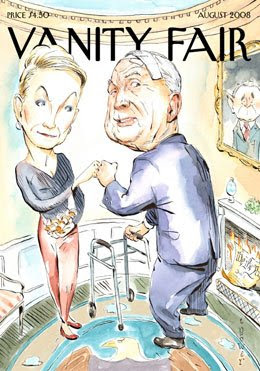 While you examine the cover art here, remember that Cindy McCain has been given a media pass on her drug addiction and felony theft of those drugs. It kind of calls into question the kind of person Cindy might be. But all’s fair, according to the right wing. Also check out this from Barely Political.

Here’s the story from the CBC online:

Vanity Fair is not to be outdone by The New Yorker in the arena of political parody. After The New Yorker's controversial cartoon satirizing views of Barack Obama and his wife, Vanity Fair has posted a cover online that pokes fun at rival presidential candidate John McCain.

McCain is shown leaning on a walker with his head bandaged, bumping fists with his wife, Cindy. Cindy McCain is carrying an armful of painkillers, a sad portrait of George W. Bush hangs over the mantel and the constitution burns in the fireplace.

Vanity Fair describes the cartoon by Tim Bower, which only appears online, as a "selfless act of solidarity with our downstairs neighbours at The New Yorker."

The New Yorker cover showing Obama in Muslim garb and his wife outfitted as an urban guerrilla unleashed a barrage of criticism, from readers and other media outlets.

But like The New Yorker, Vanity Fair is getting criticism for the move. Some readers claim the cartoon is not satirical enough — that the cartoonist could have gone further to parody Cindy McCain's wealth and business ties. Some criticized the cartoon for poking fun at real personal health problems, like Cindy McCain's admitted addiction to painkillers.

But others appreciated the cartoon as a satire of a satire and thought it hit just the right note of humour.

The Seattle Post Intelligencer said Vanity Fair ripped off its own McCain parody, which ran July 15. The cartoon in the Seattle paper shows McCain in a wheelchair and Cindy with pills, while the constitution burns in the fireplace and a portrait of Dick Cheney hangs over the mantel.