Iraq War That No One Saw 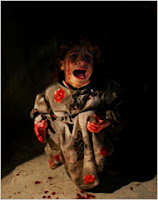 JAN. 18, 2005 An Iraqi girl after her parents were killed by American gunfire in Tal Afar.
NY Times: 4,000 U.S. Deaths, and Just a Handful of Public Images

If the conflict in Vietnam was notable for open access given to journalists — too much, many critics said, as the war played out nightly in bloody newscasts — the Iraq war may mark an opposite extreme: after five years and more than 4,000 American combat deaths, searches and interviews turned up fewer than a half-dozen graphic photographs of dead American soldiers.
Posted by John Peterson, Democurmudgeon at 7/26/2008 11:30:00 AM