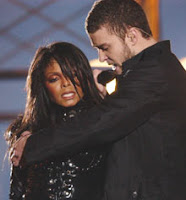 Oh the legacy of the Republican congress and their infalable Mr. Bush. The CBC/AP story goes like this:

A federal appeals court has overturned the record $550,000 fine for indecency against CBS Corp. for Janet Jackson's "wardrobe malfunction" at the 2004 Super Bowl. A three-judge panel said the Federal Communications Commission "acted arbitrarily and capriciously" in levying the fine. The court also said the FCC had deviated from its previous standard of excluding fleeting images from fines for indecency.

But (the) court ruling said the FCC was not applying a consistent standard, but reacting to the "shock treatment" of the incident. "The FCC cannot change a well-established course of action without supplying notice of and a reasoned explanation for its policy departure."

What, the Republiprudes overreacted over something sexual, that didn’t include public restrooms and congressional pages?

Closeted conservatives didn’t seem concerned about whether the major networks suddenly had to censored run of the mill movies that depicted "possible" objectional sexual content, verbal assaults or offensive violence.

So let me get this right: Republicans can continue to insist people know what’s best and can make their own decisions, without government interference, except when it comes to something they don’t like. Then it’s time for big government fines and morality. Got it. Like I’ve always said, their ideology is filled with obvious contradictions.

Another unfortunate consequences of that over-reaction resulted in a game broadcast delay that makes the radio and TV action out of sync, doing away with listening to the radio while watching the action on the field.

Even more insulting, was the time span of the Jackson infraction. “About 90 million viewers saw a naked female breast for nine-sixteenths of a second during the 2004 Super Bowl half-time show.”

Have no fear, the law is still good for any future “morally objectionable” moments. “The incident prompted a crackdown on indecency on TV with President Bush signing a bill that mandated larger fines for indecent broadcasting.”