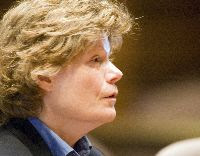 It seems we’re not being told everything about the controversial Georgia Thompson case, where she was convicted in June 2006 of “improperly steering a state travel contract to Adelman Travel Group, a company with political ties to Doyle.

According to the Wisconsin State Journal:

“The controversial case … was used by Wisconsin Republicans to paint Democratic Gov. Jim Doyle's administration as corrupt during his 2006 re-election campaign.

State investigators kept open the alleged corruption case for six months last year after a federal appeals court struck down the only prosecution in the high-profile case.

What’s missing? The federal investigative side of the story was not included for some reason.

The file released to the Wisconsin State Journal under the state's open records law did not include reports provided to state investigators by federal authorities involved in the case. Some documents released also had portions blacked out to protect information provided by confidential informants or connected with a federal grand jury, among other reasons.

"The delay is surprising and so are the redactions," said Bill Lueders, president of the Wisconsin Freedom of Information Council. "You have to wonder what it is that they're protecting and whether what they're really protecting is themselves."

And so the mystery continues as to the politicization of the Justice Department and it’s prosecutions of Democratic officials in an attempt to influence an election.
Posted by John Peterson, Democurmudgeon at 7/23/2008 12:58:00 PM